For those of you who don’t subscribe to my monthly newsletter (because you hate sneak peeks, chatty status updates, and the occasional freebie), Human beta readers have the second Arca book in their hands now. 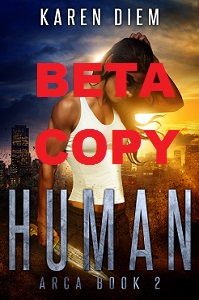 The first draft of Human is done. Beta readers are the stalwart souls who brave the chaos of an early draft and let the writer know what needs mending. While Human’s away, the author will play… Or work writing more short stories and Arca Book 3, tentatively titled Power.

Once it comes back from the beta readers, I’ll edit it and update it based on their comments and anything I catch in the interim. After that, it goes to the professional editors, depending on their schedules. Once they’re done battling my comma clone army, it will be final formatting and release time!

Barring any major delays, Human is on schedule for an early May release. Said date might be one that I’ve used before, which also commemorates Mexican underdogs and excessive margarita consumption.

Seriously, people reading my newsletter knew all this and got a copy of the first chapter already.